Widely recognized in western culture, this plant traces it's uses back to antiquity. Chamomile is renowned for its calming effects, and so intuitively associated with those cozy sensations. It not only helps bring calm to our mind, it also quells any hectic, inflamed, or distraught processes that are taking place in the body. 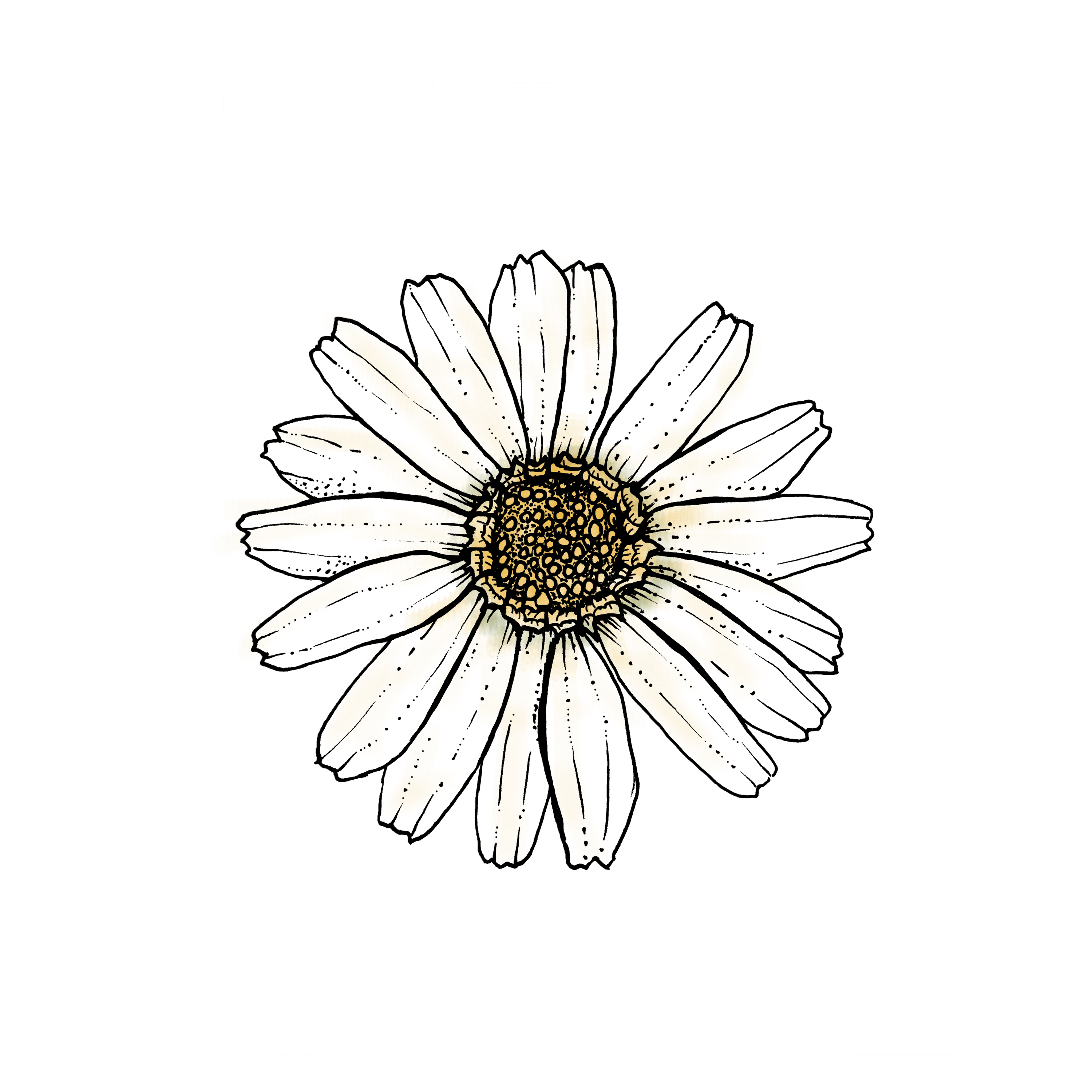 Only pick Chamomile when it is in full bloom, preferably after the morning dew has dried and before the midday sun has reached it's zenith. Simply pick only the most open flower buds with a pinch, while supporting the rest of the stem with your off hand.

Spread out the flowers on a sheet or tray, in a single layer, and allow to dry for 1 to 2 weeks in a dark, slightly warm, and dry space.

Rinse and repeat for flowers that are in full bloom all summer!

Store in a sealed jar, away from sunlight, in a dark and dry space until ready for use.

German chamomile flowers contain 0.24- to 2.0-percent volatile oil that is blue in color.

Chamazulene is formed from matricin during steam distillation of the oil. Yield varies depending onthe origin and age of the flowers. European Pharmacopoeia recommends chamomile contain no less than 4 mL/kg ofblue essential oil.

Chamomile also contains up to eight-percent flavone glycosides (apigenin 7-glycoside and its 6’-acetylatedderivative) and flavonols (luteolin glucosides, quercetin glycosides, and isohamnetin); up to 10-percent mucilage polysaccharides; up to 0.3-percent choline; and approximately 0.1-percent coumarins (umbelliferone and its methyl ether,herniarin).

The tannin level in chamomile is less than one percent.

Several pharmacological actions have been documented for German chamomile, based primarily on in vitro and animal studies. Such actions include antibacterial, antifungal, anti-inflammatory, antispasmodic, anti-ulcer, antiviral, and sedative effects

In vitro, chamomile extract inhibits both cyclooxygenase and lipoxygenase, and consequently prostaglandins and leukotrienes. Other anti-inflammatory effects are thought to occur via the influence of azulenes(chamazulene, prochamazulene, and guaiazulene) on the pituitary and adrenals, increasing cortisone release and reducing histamine release.

Research is exploring the antiproliferative and apoptotic effects of chamomile extract in various human cancer cell lines. One preliminary study observed in vitro exposure to chamomile results in differential apoptosis in cancer cells but not in normal cells at similar doses; apigenin and apigenin glycosides appear to bethe key components responsible for these effects.18

Clinical uses: actions are slow and gentle but long lasting

Insomnia, night terrors, diarrhea, colic, wounds, bruises, mucosal inflammation, headaches, and eczema. Most will use it for its ability to release tension and create an overall sense of calm and wellbeing at the end of the day.

Several cultures have a ritual of bathing newborn babies for the first time in chamomile water (a dilute tea form of the herb). This tradition is a therapeutic practice that is both medicinal and enchanting for the baby and the bather. Many old world religions performed blessings in flower water.

Ancient Egyptians believed chamomile to be a sacred gift of the Sun God (Ra). They used the herb for fevers, heat strokes, and to “cure” malaria. Chamomile was also utilized during the mummifying process of the dead.

It received its popularity through religious movements that saw priests grow it in church and monestary gardens for spiritual and medicinal purposes.

The German name for Chamomile is alles zutraut (capable of anything).

Chamomile has received the nickname the “plant’s physician” because of its ability to have positive effects on surrounding plants that are growing nearby. It is also a magnet for bees, butterflies, and other beneficial insects.

We use chamomile in our calm elixir, which is a blend of relaxing, neuro-restorative herbs that aids the body in releasing tension and balancing energy.