An herb that has been used for hundreds of years for its valuable sedative medicinal characteristics. Skullcap is a perennial plant kin akin to mint, known for its soothing properties.

Identified by:
Square stems and jagged edges of its leaves, can grow up to three feet tall and is adorned with dainty blue flowers formed by two tongue-like petals. 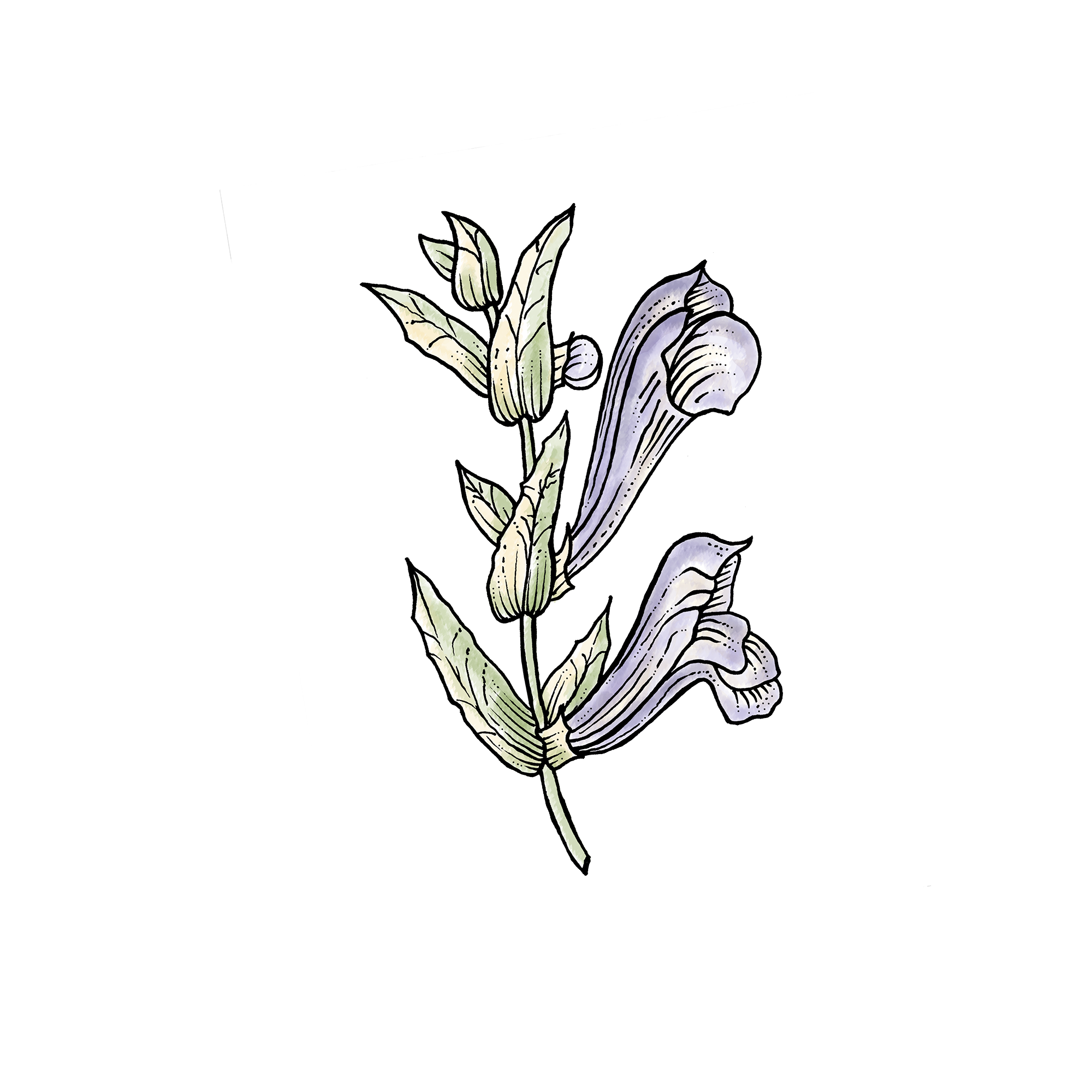 Together, the two petals were said to resemble the helmets of medieval European soldiers, hence its common name: skullcap. The herb has a long history of use among Native Americans for an array of ailments. Utilized by the the Cherokee to stimulate menstruation and relieve breast pain, skullcap was employed in the ceremonial transition of young girls to womanhood.

The Cherokee also used infusions and decoctions of skullcap roots for treating diarrhea, kidney problems and to encourage expulsion of the placenta after childbirth. In the 19th century, skullcap was used by herbalists as a remedy for "hysteria," epilepsy, convulsions, rabies, and mental illnesses because of its sedative effects on the nervous system. Recently, skullcap has also been used in weaning patients from barbiturates and tranquilizers.

Skullcap is a perennial indigenous NorthAmerican herb found growing in moist thickets, woods,fields, and bottomlands throughout the continent. Theplant’s geographic range extends from Newfoundland toBritish Columbia and south to Georgia and California.The herb spreads by slender rhizomes and runners.

Only harvest Skullcap when it is in full bloom, preferably after the morning dew has dried and before the midday sun has reached it's zenith.

Cut the stem 3 inches above the ground to collect all aerial parts. Tie into bundles, roughly the size of an average bottle neck, with loose twine or hemp rope. Hang in a cool, dry, and well ventilated room out of the sun.

Store in a sealed jar, away from sunlight, in a dark and dry space until ready for use.

The applicable parts of skullcap are the above ground parts. The main, active constituents of Skullcap consist of 2 flavonoids: baicalin and wogonin. Other flavonoids found in skullcap include scutellarin, ikonnikoside I, methoxyflavone, and catalpol.

Constituents of skullcap seem to interact with the serotonin receptor 5-HT( 7 ), but it is not known if these constituents act as an agonist or antagonist on the receptor. Skullcap's activity on the 5-HT( 7 ) receptor is at least partly due to the presence of the flavonoids scutellarin and ikonnikoside I.

It is thought that the flavonoid constituents of skullcap might act as GABA agonists and therefore have a sedating and anxiolytic effect. According to animal research, skullcap contains a flavonoid, baicalin, which is reported to bind to the benzodiazepine site of the GABA-alpha receptor.

We utilize skullcap in our formulas to help reset the nervous system and dissolve any tension and erratic signals that may be occurring. Skullcap is found in our calm elixir, which is a blend of relaxing, neuro-restorative herbs that aids the body in releasing tension and balancing energy.