Most people have a closer to relationship to the willow tree than they may think. The salicylates, a major active compound, in willow bark lead to the discovery, development, and production of aspirin. Willow bark, though, provides all the beneficial qualities of aspirin without any of the nasty side effects. This is considered to be one of the quintessential reference points for the effectiveness of whole plant medicine.

Distinguishing features: The white willow tree can grow up to 25 meters,  with short trunk and ascending, spreading crown.

Its bark has a slightly grey hue and is irregularly ridged and fissured throughout. It's twigs are thin and flexible, often hanging downward,  with and olive to brownor reddish brown color. Its narrow  and oblong leaves alternate off these twigs. 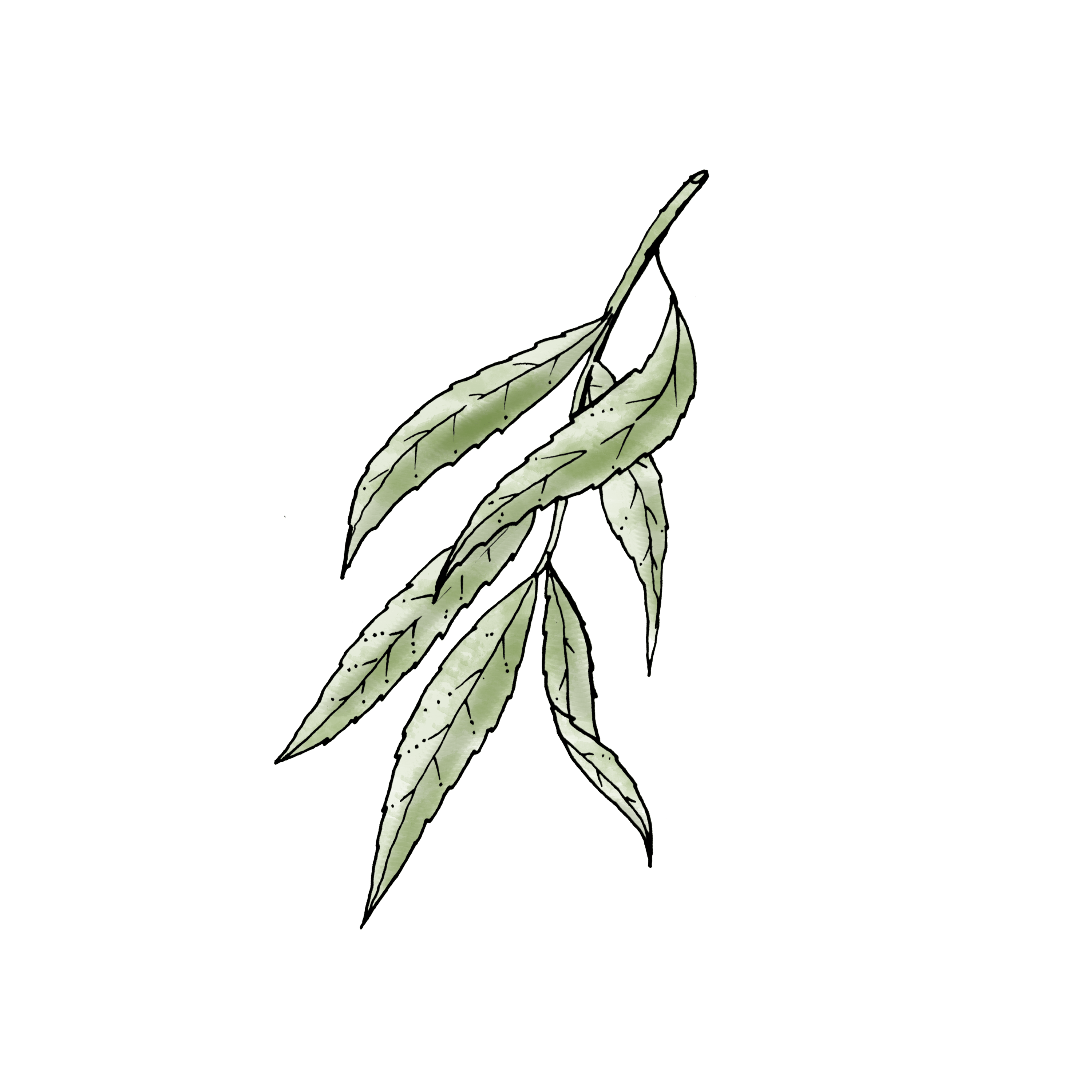 There are over 500 species of Salix, native to western Europe, but are now found in cold or temperate parts throughout the Northern Hemisphere.  Salix alba can be found along rivers, lakes, and other natural water sources. They need large amounts of water and sunshine alike, and is the reason you'll often see them basking on banks by themselves.

Willow bark is best harvested during its dormancy, any time after the leaves have fallen, and before any new growth begins in spring.  If Willow is harvested during the waning moon, the vitality will be strongest in the root system, which will help ensure future harvests.

Cut newer branches with large twigs, and peel the bark off the twig. Place the twigs in a basket and store in a cool, dark, and dry place until they are completely dry.

Store in a sealed glass jar out of direct light and heat sources.

Willow twigs have long been utilized to create divining rods, which were utilized to find sources of freshwater underground.

Rural folk of ancient times believed that willow was an effective treatment for rheumatic conditions due to the fact that it grew in swampy and damp conditions. Typically rheumatic conditions were thought of as an accumulation of stagnation and damp in the joints. Although not completely scientifically accurate, they hit the nail on the head for its most important use.

In Greek mythology, willow was sacred to Hera, Hecate, Circe and Perspehone; all of goddesses of the underworld. In Celtic mythology, willow represents death goddesses. It has been used by magic practitioners as a tool to facilitate shadow work, or to help us acknowledge the darker parts of our psyche, to bring light and healing to those areas.

Salicylates - Salicin - The most prominent constituents of willow bark provide its anti-inflammatory, anti-platelet, and anti-pyretic(fever) effects.

Tannins - This constituent is often associated with wine and teas that give the body and mouth feel associated with these drinks. Tannins are astringent and styptic meaning they tonify tissues and prevent bleeding, diarrhea, and suppurative conditions that produce lots of pus.

Flavanoids - Flavanoids have a wide range of effects on the human body, and are found in most plants throughout our ecosystems. They have been associated with the following actions: anti-allergic, anti-inflammatory, antioxidant, anti-microbial (antibacterial, antifungal, and antiviral), anti-cancer, and anti-diarrheal activities.

Willow bark seems to inhibit cyclooxygenase (COX)-2 mediated prostaglandin release, inflammatory chemical messenger, but it doesn't seem to directly affect COX-1 or COX-2 activity. Constituents of willow bark other than salicin may have lipoxygenase-inhibiting, another chemical messenger, and antioxidant effects that could contribute to its ability to reduce painful sensations.

Willow bark has been proven to inhibit platelets from sticking to each other, though not to the same level as aspirin. This can be useful to prevent stroke, heart attacks, and other ischemic conditions that occur due to reduced blood flow.

Willow bark has the ability to quench fevers, preventing our body temperature from reaching critical points when it is fighting and infection.

We utilize willow bark in our Soothe formula, which is a targeted blend of pain relieving and anti-inflammatory herbs designed to directly target our pain sensory pathways and block the chemical messengers that cause widespread inflammation throughout our body.